The history of the Lancaster County court began when William Penn drafted his Frames of Government and the English system of government was adopted in Pennsylvania. Judges with proficiency in administering justice in cases of serious felonies heard appeals in regional courts, while justices of the peace, designated from local citizenry presided over lesser offenses and administrative duties.

After the establishment of Lancaster County in May 1729, the new Lancaster County court held its first session in August 1729, at a local tavern. In 1737, the county's first courthouse was constructed in the square at Lancaster. It is in this courthouse that the Continental Congress met on September 27, 1777, and the Pennsylvania General Assembly met during the British occupation of Philadelphia. In 1786, the original courthouse was destroyed by a fire and a new one was constructed in the square and used until 1853.

The provisions of the Pennsylvania Constitution of 1790 required for the first time that local courts have a presiding judge, "learned in the law". William Augustus Atlee was designated as the first president judge of the Lancaster County court under the 1790 constitution. He held court in a structure in Penn Square, Lancaster, with the first session extending over four days beginning October 31, 1791. The two trials held during that term involved theft, one of a cow, and one of a horse. The horse theft case had been held over for re-trial by order of the pre-constitutional court, and the alleged cow thief was cleared on the condition that he pay court costs.

In 1838, the new constitution allowed for 10-year judicial appointments by the governor with senate approval. Later an 1850 amendment removed all sitting judges, and replaced them with judges designated by popular election. In 1874, that term was set at 10 years, and a 1968 amendment to the constitution allowed judges to be selected by popular election for their initial 10-year term and thereafter stand for either election or retention.

In 1968, a constitutional amendment created a unified judicial system extending from the Magisterial District Court through the Supreme Court.

In 2016 the Lancaster County Court of Common Pleas celebrated it's 225th Anniversary.

Watch the video from the 225th Anniversary Ceremony 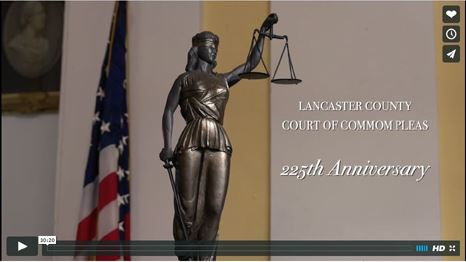